Henry van de Velde - end of Art Nouveau, protagonist of modernity, pioneer of the Bauhaus movement and campaigner for a new style

Henry van de Velde (1863 – 1957) was a prominent designer in the European art scene at the beginning of the 20th Century. Exceptionally talented in many areas, as a painter, designer, art theorist and reformer, he significantly shaped the later phase of Art Nouveau in Germany and was considered a pioneer for the Bauhaus concepts. With his artistic motto, "the line is a force", he fought for the purely decorative and ornamental to be overcome by a new style, which was to replace the outdated shapes of historicism. His ambitious and vigorously pursued life-long goal was to create a new life and design style by uniting the demands of functionality and artistic aesthetic, and in doing so to achieve reform in all areas of life.

In his "Designs for Life", he began from the idea of an overall work of art, a vision which Walter Gropius (1883 – 1969) consequently revived, in particular in his Bauhaus concept in Dessau.

The design and construction of Villa Esche in Chemnitz was van de Velde's first commissioned work in Germany. The linear and functional design documents his rational approach to Art Nouveau. Van de Velde's design embraced all areas of the family home: from façades and room layout, to wall design and coverings, doors, windows, lamps and carpets, furniture, porcelain, silverware, letter openers and travelling blankets for the car... and even clothing and jewellery for the lady of the house. The Belgian also incorporated the spaciously laid out gardens functionally and artistically into the overall concept of the house. Virtually unaffected by the wishes and ideas of the building owners, Villa Esche is an exceptionally authentic testimony to the architectural philosophy of Henry van de Velde, which has been elaborately and sensitively restored to clearly reflect this.

Van de Velde died at 94 years of age in Zurich. Shortly before, he was made an honorary senator of what is now the Bauhaus University in Weimar. 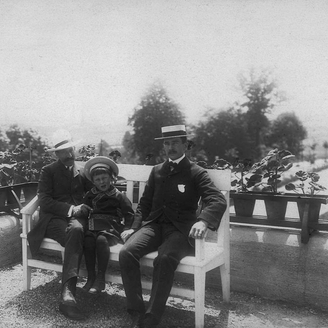