Construction contracts from the Esche family and their circle

With initially four designs by the artist, Chemnitz is deemed to be a highlight of the European Henry van de Velde Route. In Lauterbach, near to Crimmitschau, Henry van de Velde redesigned some rooms at the Esche family estate by order of Arnold Esche (a brother of Herbert Esche).

After their first commission for furniture, Herbert and Hanni [Johanna] Esche entrusted the Belgian artist with designing a living space for them as an overall work of art, encompassing the architecture, interior and parkland. In 1911, the house was once again converted according to the plans by van de Velde.

In 1908, the Chemnitz-based entrepreneur and stocking manufacturer, Fritz Eugen Esche, a brother of the owner of Villa Esche, commissioned Henry van de Velde to build a clubhouse for the Chemnitz Lawn Tennis Club C. L. T. C. This club was already founded in 1894, eight years prior to the foundation of the German Lawn Tennis Club, and was for a long time the only one in Chemnitz. Herbert Esche's brother Fritz was one of the first members of the club and served on its management board until its dissolution. Van de Velde designed a three-storey, modern and functional building, boasting all the necessary facilities and a lengthy balcony overlooking the playing fields. Among other things, the design incorporated a bar, cloakroom, reading room, boardroom and administrative offices complete with furniture, lighting and carpets.

Sadly, this remarkable building was demolished in the 1960s. Some records and equipment items as well as historical photographs by the Weimar-based court photographer, Louis Held, bear witness to the original appearance of the elegant and modern clubhouse, in the showcase exhibition of Villa Esche.

In 1908, the Councillor of Commerce and City Councillor, Theodor Koerner sr. (1855 – 1921), owner of the ink manufacturing company, Beyer, and father-in-law of Herbert Esche, commissioned Henry van de Velde to redesign his great hall at Villa Quisiana which was built in the Neo-Renaissance style. This lesser known work of van de Velde experienced several structural changes in the period between the end of World War 2 and 1990. Within the context of the renovation work started after German reunification, offices and a restaurant were established in the former factory-owner's villa until 1996. It was then that the great hall designed by van de Velde was restored and largely returned to its original condition.

Viewing by appointment only

Hanni [Johanna] Esche's  brother, Dr Theodor Koerner junior (1882 – 1958), commissioned Henry van de Velde to build and furnish his own villa diagonally opposite to his parents' home. Like many of the commissions that the Belgian artist undertook during the final years of his career in Weimar, Villa Koerner was more in line stylistically with the ideal of the prestigious bourgeois house than his first villa projects. During World War 2, an incendiary bomb destroyed the two upper storeys of Villa Koerner; only a few remnants of the interior design survived. Until the villa was returned to Koerner's heirs in 1990, it served as the data processing centre for the Ermafa machine factory. The building was sold in 2001 and the new owners restored the exterior and set up office and living spaces inside. Van de Velde's floor plan was preserved on the lower levels and the furnishings of the great hall were reconstructed from historical photographs.

The Esche family estate was located in Lauterbach, near to Crimmitschau. Herbert Esche's youngest brother, Arnold Esche, had the interior of the mansion on the Lauterbach Manor, which was constructed in 1884 in the Neo-Renaissance style, completely redesigned by Henry van de Velde. In 1907 – 09, modern furnishings evolved for some of the rooms, including the study, dining room, living room as well as some of the bedrooms. Many of these elements, such as the ceilings, wood panelling, lighting, etc. remain to this day. The building is currently being restored. 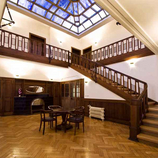 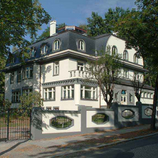 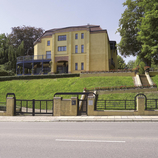