After staying in Berlin for just two years, Henry van de Velde moved to the city of Weimar in Thuringia with his family in 1902 and acted as Artistic Adviser for Industry and Craft in the service of the young Wilhelm Ernst, Grand Duke of Saxony-Weimar. Here, by launching an arts and craft seminar, van de Velde took his first steps towards fulfilling his life-long desire, to found his own school. His teaching career in Weimar, which was to last over ten years, had begun.

Alongside numerous private commissions for furniture and equipment items, his first commission, which came right at the beginning of this time, was in Chemnitz; the construction of a residential property for the family of the Chemnitz-base textile entrepreneur, Herbert Esche, van de Velde's first architectural commission in Germany.

Numerous other designs for living spaces, the interior decorations for the Nietzsche archive and the commission for additional residential properties and the Lawn Tennis Club in Chemnitz occurred during this Weimar period. And finally – in 1907 – he also built his own School of Arts and Crafts. 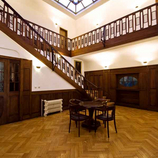