In 2001, the factory owner's villa designed by van de Velde as an overall work of art was given a new lease of life; the elaborate and meticulous restoration work came to an end and Villa Esche opened its doors as a meeting place for commerce, art and culture. Today, it is a renowned event and concert setting, popular conference venue and exquisite event location, which also hosts a museum dedicated to Henry van de Velde.

To understand the background to the idea behind the building's current use, you need to take a look at the traditions and history associated with the house: the notion of friendship between Henry van de Velde, as one of the leading protagonists of the European art scene, and the Esche family, as one of the most notable entrepreneurial families in Chemnitz.

As a symbol of industrial heritage in Saxony, Villa Esche's current use makes direct reference to the combination of commerce, art and culture which was extremely fruitful for Chemnitz as well as being almost exemplary in historical terms: The erstwhile client, Herbert Eugen Esche, descended from one of the most successful entrepreneurial families in Chemnitz. The family left many important traces in Chemnitz and also became part of the industrial history of Saxony: At the turn of the 18th Century, ancestor Johann Esche developed the first functional stocking maker's stool in Germany. The company, Moritz Samuel Esche, in Chemnitz ultimately produced for an international market and had offices from Boston to Shanghai. It remained the leading stocking manufacturer in Germany until the global economic crisis in 1928/1929. The family's keen foundation activities in the cultural, social and educational spheres have for generations testified to the diverse commitment of the Esche family to Chemnitz and the surrounding area.

Using Villa Esche both as a museum and for commercial purposes also set a precedent for an unusual model for operating a cultural institution within a protected monument: Since 2001, an alliance of companies, associations, institutions and organisations as well as primarily private-sector and civic involvement have ensured the preservation, public use and operation of a historical monument of classic Modernity in Germany and enabled a unique ensemble and record of the works of Henry van de Velde to be experienced in a sensitive and diverse manner. Grundstücks- und Gebäudewirtschafts-Gesellschaft m. b. H. Chemnitz (GGG), the second-largest housing company in Saxony and owner of Villa Esche, acts as the initiator, driving force, organiser and coordinator of the network of commerce, art and culture established by it in recent years at Villa Esche.

Since 2008, Villa Esche has provided young people with the opportunity to complete federal voluntary service in culture in as part of the Villa Esche event management team.

The Restoration of Villa Esche 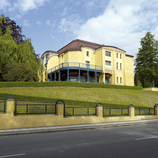